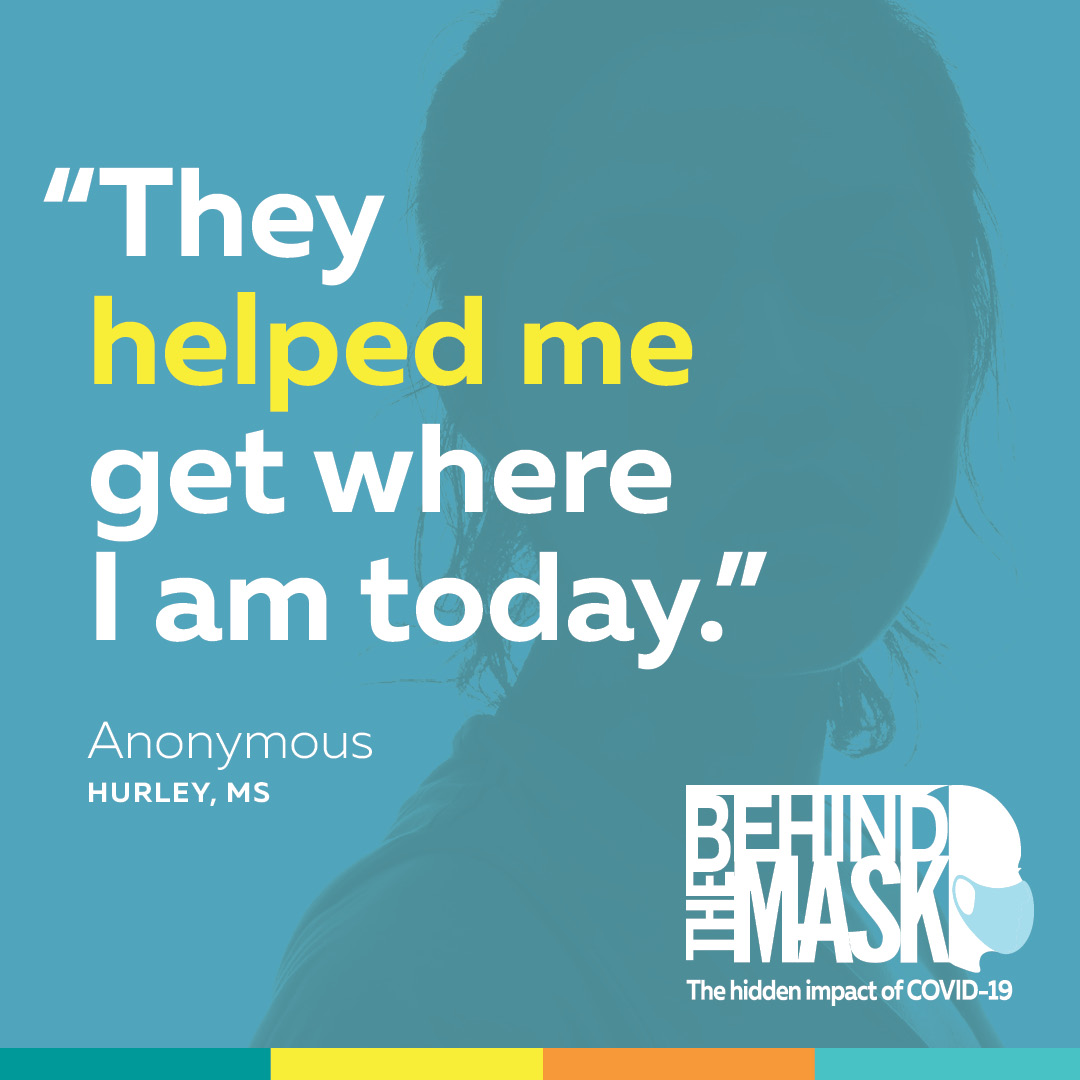 “I am 26 years old and I am from Hurley, Mississippi. I come from a family of mental health issues on both my dad’s and mother’s side and most importantly, myself.

I have always known something was not right with me. In my family’s words, I have often “flown off the handle.” I was never taught how to handle or control my emotions. I’ve never wanted to seek help and did not know there were services available from my Community Mental Health Center, Singing River Services.

Before the pandemic, I could keep myself busy and ignore my mental health. COVID-19 brought my mental health issues to light. I lost my job and isolated myself. I had no option but to drown in my diagnosis. Then I found help through Singing River Services where staff took the time to really understand my story and saw me as more than my diagnosis. They helped me get where I am today.

Months later, I have learned to better control my emotions. I spent the holidays with my family, – something I have not been able to do in years due to my mental illness.

If I could give anyone any advice it would be to seek help. Singing River Services really does care, and they are available to help you if you are willing to reach out.” 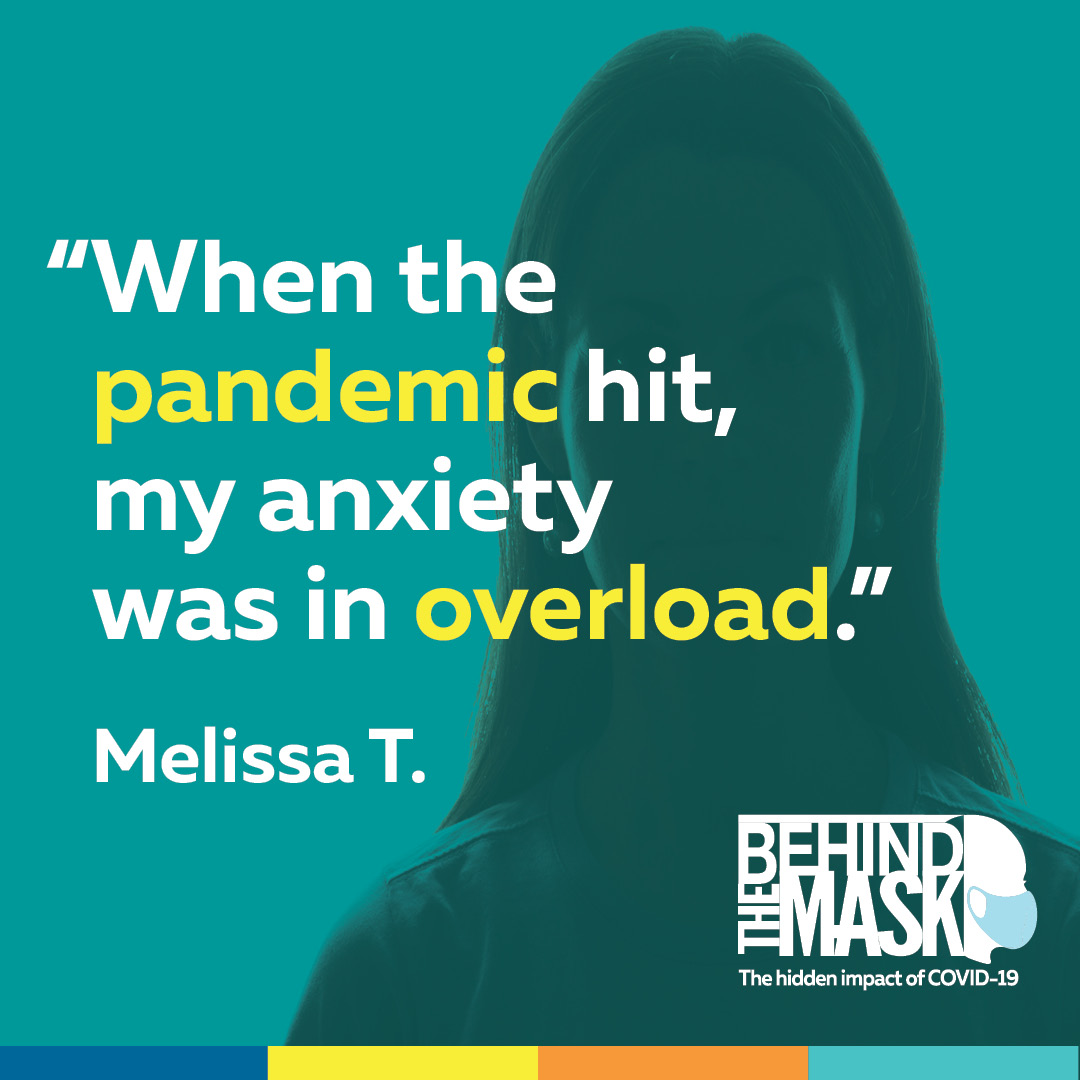 “My name is Melissa Thompson. I am a 52-year-old mother of 2 and grandma of 7. I have always had some anxiety in the past but could never afford to get the medical attention that I needed.

When the pandemic hit my anxiety was in overload. I had so many sleepless nights, where I would worry and stress, and also dealt with depression. I went from living life to thinking about death every hour of the day praying that I live to see another day. I was overwhelmed with my anxiety, but no longer had my best friend to talk to about how I was feeling. She was the one who could calm down my anxiety, but unfortunately, she lost her life to COVID-19.

It was really beginning to be a lot, so one day I was talking to a friend and she told me about our local Community Mental Health Center, Singing River Services. I gave them a call and they made me an appointment. I will say that was the best decision of my life – just having someone to talk to.  I started seeing a counselor and was prescribed medication that helps me sleep at night. They regularly call to check in on me to see how things are going. I had never had a problem with my health prior to the pandemic and going to see someone helped me to calm down a bit.

I would tell anyone who may need to talk about the effect the pandemic has had on the lives, don’t feel ashamed. I’m here to tell you that it helped me at a time in life with so many uncertainties and I thank God for Singing River Services.” 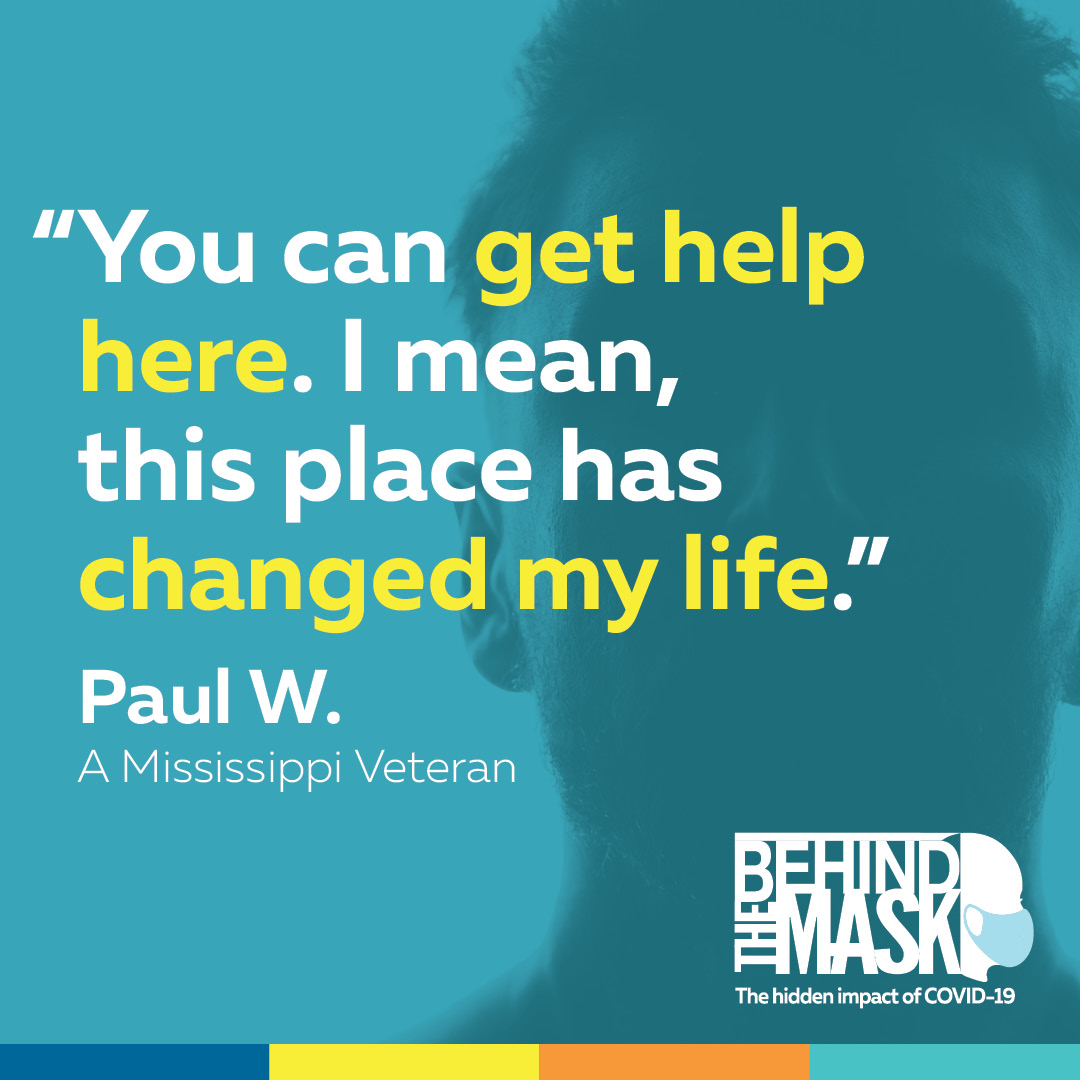 “My name is Paul Webster and I’m 38 years old. I pretty much had a normal childhood. I had a great upbringing, a good mom and dad, made good grades, and always had high hopes and dreams.

After Hurricane Katrina hit in 2005, I lost everything. I really didn’t have a house to go back to.  Pretty much everything that I had known and worked for was gone. I decided to move up to Chattanooga, Tennessee with to live with my girlfriend. I needed to support us, so I talked to a recruiter and ended up joining the Marine Corps.

After I graduated from boot camp, my girlfriend and I got married and became pregnant. Not long after, I received orders to go to Iraq in support of Operation Iraqi Freedom. That was my first deployment where I was exposed to a lot of combat-induced post-traumatic stress. I was diagnosed with several traumatic brain injuries due to explosive blasts. Whenever I came home from the year-long deployment, I wasn’t the person that I was before I left. I had a seven-month-old little boy and a brand-new wife to adjust to as well.

Deployment took a lot out of me. I lost a lot of friends over there, and I really didn’t even know who I was anymore. I was in bad shape. I wasn’t the same person. Not only was I trying to learn how to be a dad and a husband, which is enough stress for a normal person, but I had just come back from a warzone for a year and I was just really messed up. I found that  I could cope with h alcohol and developed a drinking problem. I was wounded in combat and as a Purple Heart recipient, I had all these medals. In the eyes of my country, my parents, and everybody else I was doing well.  It all looked really good from the outside, but I was miserable on the inside. I was so eaten up with PTSD at this point.

My nightmares were so bad that my wife wouldn’t sleep in the same bed with me. I was drinking pretty heavily. She told me all the time “even though you’re here with us right now, you’re not here – your mind is over there”. As crazy as it sounds, all I wanted to do was deploy, so I didn’t have to worry about the pressures of being home – being a dad, husband.

.Our sister battalion was getting ready to deploy back to Iraq, so I volunteered to go along with them for my 2nd deployment. I was gone for seven months. I came back from that deployment and things were okay for a little while, but really, I was still struggling.

About three months later, I had an opportunity for a 3rd deployment to Afghanistan, so I jumped ship again on my wife and son. After returning home, I did not know how to deal with myself, so my answer was to begin drinking again.

I got to the point where it wasn’t just drinking at night, or on the weekends, I was drinking at lunch. I was drinking in the mornings just to survive the day.  By the time I  came back from my deployment, I was just trying to maintain my family life while things were really deteriorating quickly.

My battalion commander and everybody else knew that I was going through a lot. I’d come to work with alcohol on my breath and they wanted to help me, but I insisted that I didn’t have a problem.

In the last effort to save my marriage, I volunteered to go on recruiting duty for the Marine Corps in my wife’s hometown of Chattanooga, Tennessee. I continued to excel at work and we bought a nice house. By this time, we’ve got two little boys. And on the outside, once again, everything looks great. Everyone’s proud of me – the Marine Corps and her family, but really, inside that house, it was a different story. My three years of recruiting duties ended and I discovered drugs. Ultimately, I lost my wife, my family, and my career.

This went on for the next seven years. I ended up getting caught a few years ago with a small amount of drugs. I went to jail and entered the Jackson County drug court program.

I had a really good friend who was a veteran and- in the same drug court as I am. He went to alcohol and drug treatment at Region One Mental Health Center  When he came home he saw how bad off I was. I saw the change that it made in his life and really wanted what he had. After ending up back in jail, I was offered the option of treatment at Region OneWhen I walked through the front door I was just broken. I really wanted to make a change in my life, not just for me but for my kids, my ex-wife, and my family. I was just sick and tired of the way that I was living. I feel like I’ve accomplished so much in my life I had a lot of trauma that I just never worked through before and I was ready for a change.

My life since I’ve gotten to Region One has changed drastically. I’ve had counselors who have cared enough about me to help me walk through my PTSD.  tI’s been hard work,  but I feel like I’m coming out at the end of it, and  able to even start liking myself a little bit. I’m not afraid to look in the mirror anymore.

I think the power of Region One rests squarely on the shoulders of the counselors. I mean, as soon as you arrive, they make you feel like family – everybody from the director all the way down to the counselors.

If you come into this place, ready and willing to make a change in your life, if you’ve had enough of drugs and alcohol, this place and these counselors are very good at what they do. You can get help here. I mean, this place has changed my life.”